mmap(): Now you're coding with portals

I decided to write a circular buffer (CB) because my bittorrent client was responding to a peer's requests faster than what it could write. The poll function of my API threw me completely. My first two efforts were superseded by the third!

Effort #1: Reading straight from the CB

Looks great, and would be an easy to use function. Unfortunately, boundary cases are the killer. For example, say as if you want to poll 10 bytes, but the head of the CB is currently at byte 9. This means that the caller of cbuf_poll has to know that we've hit a boundary case. In fact, the API just can't work this way, and it'd be easier on the user if the function was instead:

Effort #2: Writing from the CB to a buffer


I'd just use a for loop for writing each byte and check the indices for the boundary conditions. Easy. But, this feels kind of slow because of the extra memory writing you wouldn't need to do if the original function worked.

Effort #3: Reading straight from the CB, using a contiguous memory space via mmap()

Maybe I'm thinking aloud, but this is how I visualise it: 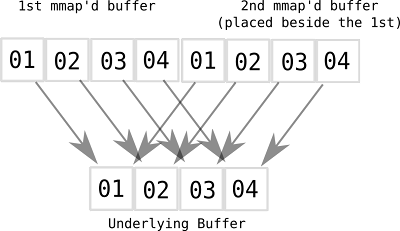 Great for two reasons:
1. The user doesn't have to worry about boundary conditions.
2. The implementation is easier (ignoring the mmap() setup code)

Pretty cool huh? Code and SVG diagram are on Github. And if I'm allowed to stretch this to another analogy: